I was interviewed live on BBC Radio Cambridgeshire’s Lunchtime Live Show. Jeremy Sallis talked to me about Against Marriage and my lecture for the Cambridge Festival of Ideas.

I’ll be talking on Against Marriage in the Bigg Books speaker series in Newcastle-Upon-Tyne on 20 November 2018. You can find more details here.

Clare Chambers is Reader in Political Philosophy at University of Cambridge. She is a political philosopher specializing in feminist philosophy, contemporary liberalism, theories of social justice, and social construction. She will argue for the abolition of state-recognised marriage on the grounds that it violates both equality and liberty, even when expanded to include same-sex couples. Instead she will defend the idea of a the marriage-free state: an egalitarian state in which religious or secular marriages are permitted but have no legal status.

I’ll be talking about Against Marriage at the Cambridge Festival of Ideas on Monday 15th October 2018, in the Frankopan Hall of Jesus College, Cambridge. Tickets are available here.

Many states have recently expanded their definition of marriage to allow marriage between same-sex couples: a welcome move towards equality, but does this go far enough? Philosopher Clare Chambers argues for a more extreme position: that the state should not recognise marriage at all. State recognition of marriage, she will argue, is a violation of both equality and liberty – no matter how marriage is redefined.

Tickets were sold out and so the talk was live-streamed. You can watch it on youtube here:

One year since the publication of “Cosmetic Procedures: Ethical Issues” the Nuffield Council of Bioethics has published a report on the impact that publication has had so far. You can read that report here.

I was a member of the Working Party on Cosmetic Procedures who produced the original report. 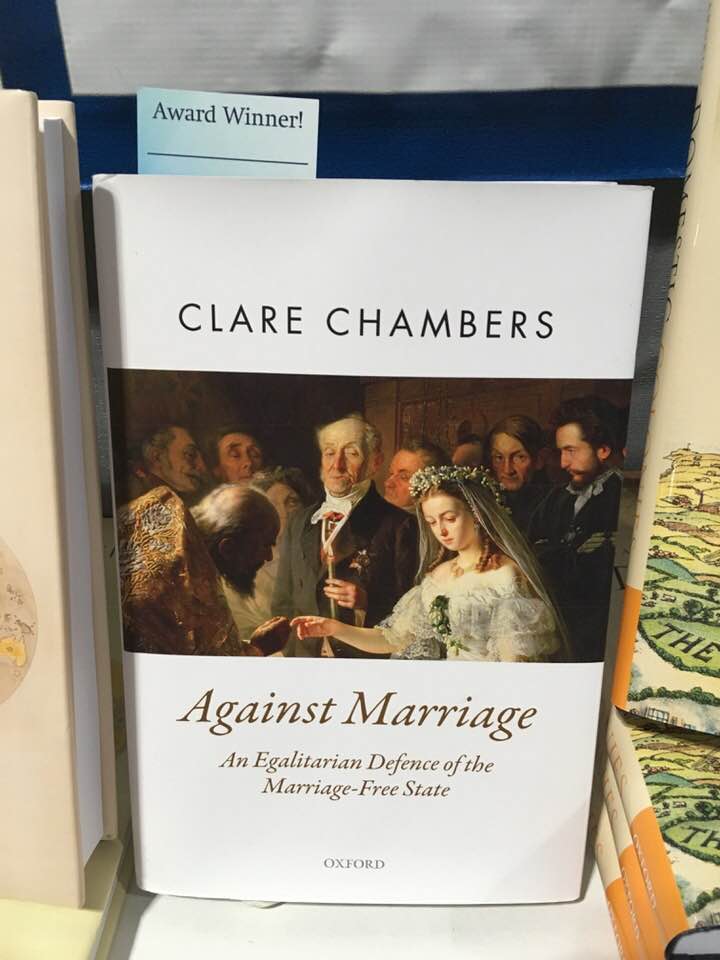 The 2018 David Easton Award was presented to me for Against Marriage: An Egalitarian Defence of the Marriage-Free State at the APSA Annual Meeting in Boston.

The Award is given “for a book that broadens the horizons of contemporary political science by engaging issues of philosophical significance in political life through any of a variety of approaches in the social sciences and humanities.” You can see previous winners of the Award here.