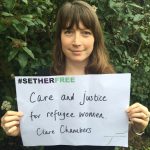 I am one of Women for Refugee Women’s 99 Women speaking out against detention for refugee women. You can see the other women here.