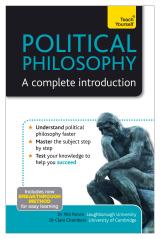 Written by two leading experts, this book can help you whether you are studying for an important exam or simply want to improve your knowledge.

The first half of the book introduces the reader to the essential concepts within political philosophy, such as freedom, equality, power, democracy, rights, and the state.

The second half of the book looks at how influential political philosophers, such as Plato, Rawls and Mill, have used these fundamental concepts in order to tackle a range of normative political questions such as whether the state has a responsibility to alleviate inequalities, and what role liberal and democratic states should play in regulating the cultural or religious beliefs of citizens.

‘Phil Parvin and Clare Chambers have produced a state of the art textbook, which provides students with a comprehensive and bang up-to-date introduction to contemporary political philosophy. Topics are introduced in a clear and eminently readable fashion, using accessible real world examples whilst drawing on sophisticated scholarly literature. There is no comparable book which covers such a wide range of topics in such a student-friendly manner.’

‘A lively, accessible and engaging read. Comprehensive and  well organized, it provides an updated account of key concepts in contemporary political philosophy, and highlights their relevance to political life in the 21st century.  A valuable book for anyone taking their first steps in the world of political philosophy, or anyone who seeks to understand the normative challenges faced by our society today.’

‘Written in a clear and accessible style, it is an engaging introduction for those who are new to political philosophy and wish to think through some of its most important questions. In addition to offering outlines of key arguments, each chapter also contains a summary of main concepts, self-test questions, a wonderful selection of quotations and some attention-grabbing ‘nuggets”