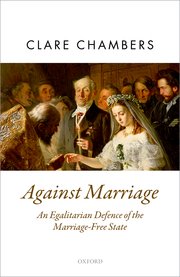 Available now in paperback and hardback from all good bookshops! Use the code AAFLYG6 at www.oup.com to buy the book at 30% off.

Against Marriage is a radical argument for the abolition of state-recognised marriage. Clare Chambers argues that state-recognised marriage violates both equality and liberty, even when expanded to include same-sex couples. Instead Chambers proposes the marriage-free state: an egalitarian state in which religious or secular marriages are permitted but have no legal status.

Part I makes the case against marriage. Chambers investigates the critique of marriage that has developed within feminist and liberal theory. Feminists have long argued that marriage is a violation of equality since it is both sexist and heterosexist. Chambers endorses the feminist view and argues, in contrast to recent egalitarian pro-marriage movements, that same-sex marriage is not enough to make marriage equal. Chambers argues that state-recognised marriage is also problematic for liberalism, particularly political liberalism, since it imposes a controversial, hierarchical conception of the family that excludes many adults and children.

“Clare Chambers has produced what will surely be for years to come the definitive argument for the abolitionist view of marriage. … [T]his is in my opinion a superb book. It is prodigiously scholarly, but at the same time wonderfully clear and accessible. The arguments are provocative and challenging throughout. The literature on this vitally important topic urgently needed a book-length defense of the abolitionist position. It is hard to imagine a book performing this necessary role better than Chambers’s Against Marriage.”

Against Marriage is “political philosophy at its most practical and readable.”

“This is a distinct and important contribution to an increasingly crowded field of liberal political philosophy on marriage and the state and, perhaps most interestingly, to our understanding of the liberal project broadly. … Where other liberals seek more vigorously to balance competing demands of freedom and equality, or emphasize freedom, Chambers hews rigorously to an egalitarian position. You won’t find another book that does this so effectively or by way of such productive engagement with existing scholarship. Laying out the egalitarian case in such clear and compelling terms, Chambers highlights the challenges it presents to the liberal side of her liberal feminist equation. In so doing, Against Marriage leaves us wondering just how tenable the liberal feminist project is. … Chambers leads us to these questions by bringing us to the edge of the liberal feminist frontier. This alone would make Against Marriage a distinct and important contribution. But, of course, Chambers does more. She offers a compelling vision of why and how to move beyond marriage and points us in the direction of work that needs to be done. All with the grace and graciousness of an analytical philosopher running at full throttle.”

“Against Marriage makes an important contribution to the debate over the future of marriage within liberalism. It is clear and cogently argued and a pleasure to read. One of its virtues is its breadth; it makes arguments which address a range of liberal and feminist views and should be accessible to non-specialists. At the same time, it advances the leading edge of the specialist debate in provocative and intriguing ways.”

“Clare Chambers provides a clear, lucid and timely argument against state-recognized marriage based on the liberal principles of liberty and equality. … Throughout, she is masterful at anticipating and responding carefully to potential objections to her arguments and proposals. …. And her responses to those who might disagree with her proposals reveal a two-fold carefulness: as a philosopher, she is thoughtful, deliberate, precise, and meticulous; as a feminist, she is attentive, concerned, and compassionate — considering not only the philosophical justifications for her proposals but also their practical fall out for women and other vulnerable populations. … I highly recommend Chambers’ book as an important scholarly and pedagogical resource. It is beautifully crafted and makes an important contribution to the literature in liberal political theory and, more specifically, to the philosophical literature on marriage and family. … It was my distinct pleasure to read this book and be provoked by its arguments into a better understanding of both liberalism’s promise and its limitations with regard to its support of diverse forms of relationship.”

“Chambers’ Against Marriage is a wonderful addition to a growing literature demanding that we think seriously about the institution of marriage and how it may have to be altered to meet the demands of justice and equity.”

What’s in a name? As it turns out, rather a lot. I explore the significance of the name “marriage” and the difference between a marriage license and a marriage certificate in an article published in Agora, the New Statesman’s philosophy column, on 2 August 2019. You can read the article here. 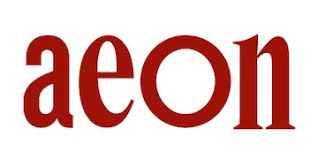 I have a 3,300 word essay on “Against Marriage” at Aeon magazine. You can read the article here.

The  Times Literary Supplement (TLS) published my piece “Time to abandon marriage?” as part of their Ethical Angles Series (2017). Read it here. 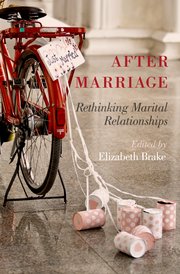 Proceedings of The Aristotelian Society (2013). This paper sets out the case for abolishing state-recognised marriage and replacing it with piecemeal regulation of personal relationships. It starts by analysing feminist objections to traditional marriage, and argues that the various feminist critiques can best be reconciled and answered by the abolition of state-recognised marriage. The paper then considers the ideal form of state regulation of personal relationships. Contra other recent proposals equality and liberty are not best served by the creation of a new holistic status, such as civil union, or by leaving regulation to private contracts. Instead, the state should develop piecemeal regulations that apply universally. You can read the paper and listen to the podcast here or on the OUP Philosophy Festival Reading List here.

In Section 50 of Justice as Fairness: A Restatement, titled “The Family as a Basic Institution”, John Rawls replies to Susan Moller Okin’s feminist critique of A Theory of Justice. The question of how Rawlsian justice might secure gender equality has been discussed by many feminists, most notably by Okin. However, as I argue in this chapter, the Rawls-Okin debate raises more questions than it answers. Okin criticises Rawls for failing to apply his theory adequately to the family: she criticises not Rawls’s approach in general, but his attitude to the family in particular. Okin argues that a consistent application of Rawlsian theory would secure gender justice, but that Rawls is remiss in refusing such consistency. In fact, as I show, Rawls’s remarks on the family reveal a more fundamental problem with Rawlsian theory than Okin allows. It is not that Rawls fails to apply his theory correctly to the family, but rather that the specific case of the family illustrates deep-seated difficulties with Rawlsian justice as a whole.

In this chapter I first outline Okin’s critique of Rawls in more detail, and provide a valid formalisation of her argument against Rawls. I then examine the main premises of her argument and look for evidence to support Okin’s interpretation of Rawls. I conclude that Okin’s interpretation is flawed but nonetheless highlights problems with Rawls’s claim that the basic structure is the subject of justice. I then consider and reject the argument that Rawls’s theory is consistent according to what I call the “whole structure view”: that the principles of justice apply to the basic structure considered as a whole. Finally, I consider G.A. Cohen’s argument that the basic structure distinction is problematic. I agree with Cohen’s criticism of the distinction, but suggest that Cohen is wrong in situating the problem with the issue of coercion. I conclude that Rawls’s position on justice in the family is at odds with his claim that the basic structure is uniquely the subject of justice.

You can see more about the book here. 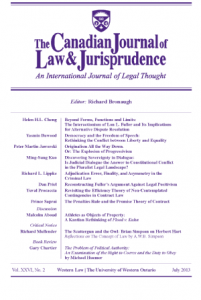 This article responds to Alan Brudner’s Constitutional Goods. It argues that Brudner’s concept of liberal inclusivity is problematic both conceptually and normatively, and results in policies on marriage and abortion that liberals would not accept. Issue No. 2 includes a response from Brudner.